The Enlightenment Stupa in Moscow, also known as the Three Jewels Stupa, was consecrated on 18 June 2008 on the grounds of Lopoukhin Mansion, where the International Center of the Roerichs and its non-governmental museum named after the Russian artist, scholar, thinker, and public figure Nicholas Roerich (1874–1947) were located until 28 April 2017. The stupa was built on the initiative of and with the blessing from His Holiness Dujom Sangye Pema Shepa Rinpoche, head of the Dujom Tersar lineage of the Nyingma school of Tibetan Buddhism. The stupa was an invaluable gift from the Buddhist lamas to the Nicholas Roerich Museum of the International Centre of the Roerichs as a testimony to Roerich’s exceptional contribution to the understanding the ancient culture and philosophy of Central Asia.

The Enlightenment Stupa was the first and, until 2017, the only Buddhist stupa in the Russian capital, constructed in accordance with all canonical rules. It holds the relics of 200 eminent Buddhist teachers brought to Russia from different parts of the world, as well as relics of Shakyamuni Buddha and Kashyapa Buddha and, giving a particular cultural and historical significance to the stupa and its location.

Since its creation, Buddhists from all over the world have visited the grounds of the Nicholas Roerich Museum to worship at or simply to visit the stupa. Among them, are a number of eminent Buddhist teachers, such as Venerable Geshe Lhakdor, director of the Library of Tibetan Works and Archives, Kathog Getse Rinpoche, and Namgyal Ati Sherab Nyima Rinpoche, in addition to official delegations from Drepung Gomang Monastery and Jonang Monastery, as well as repected Buddhist scholars such as Glenn Mullin and Robert Thurman. 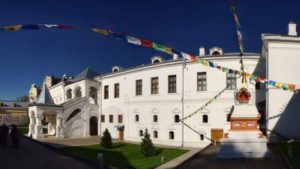 Lopoukhin Mansion with the stupa.

The first attempt to remove the Enlightenment Stupa was undertaken in 2016. The management of the State Museum of Oriental Art and the Russian Ministry of Culture tried to present it as an illegal construction and raised the issue of its demolition. That same year, Telo Tulku Rinpoche, the shadjin lama (head lama) of the Kalmyk people and Lopsan Chamzy, khamby lama (head lama) of the Republic of Tuva, spoke in defense of the stupa and opposed its destruction. They sent a letter to Russian president Vladimir Putin to ask his help in the preservation of this unique cultural site with important historic and religious significance. In a response, Putin gave personal instructions to the mayor of Moscow and the minister of culture to preserve the monument. 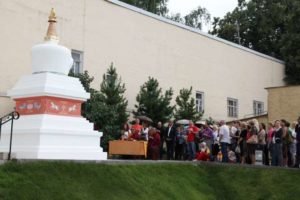 However, attempts to destroy the stupa continued. Before being deprived of access to Lopoukhin Mansion and the stupa, the International Center of the Roerichs and representatives of the Buddhist community in Moscow maintained the stupa in excellent condition. But in the spring of 2017, the State Museum of Oriental Art blocked all the access after the Ministry of Culture of the Russian Federation and the State Museum of Oriental Art took over Lopoukhin Mansion in April 2017 and the destroyed the Nicholas Roerich Museum. These actions are now being challenged in court by the International Centre of the Roerichs. As a result, thousands of Buddhists who had visited Lopoukhin Mansion for years were deprived of this opportunity to worship at the Buddhist sanctuary. Representatives of the Buddhist community in Moscow have also been refused access. Their requests for urgent reconstruction have been denied by the State Museum of Oriental Art, and the stupa has now fallen into distressing disrepair.

In April 2018, the International Center of the Roerichs – as the institution to which the stupa was donated and was entrusted – sought permission from the State Museum of Oriental Art for Buddhists to be allowed to repair and maintain the monument. For that purpose, the International Center of the Roerichs legally transferred temporary use of the stupa to the Buddhist community of Moscow, but the situation remained unchanged. 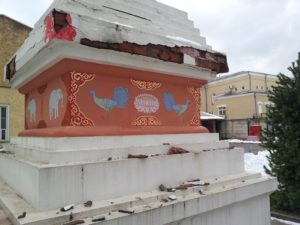 The current condition of the stupa.

On 19 September 2018, the State Museum of Oriental Art asked the International Center of the Roerichs to remove the Enlightenment Stupa from the grounds of the mansion. After protests by Buddhist groups, the director of the State Museum promised to allow the Buddhist community to organize the necessary repairs for the stupa before the winter, but reconstruction was again postponed under the pretext that the repairs needed to be coordinated with the Ministry of Culture, despite the precarious condition of the Buddhist sanctuary.

Telo Tulku Rinpoche made the following statement after being informed of the situation: “I am deeply aware that the place of the stupa should not be changed. It should stay where it was built. The stupa is not a piece of furniture that we can move from one building to another. Before its construction, extensive rituals of blessing were performed according to the Buddhist canon to determine where the stupa should be built. Over the years, numerous Buddhist followers and people who simply have an interest in the cultural heritage of the East visited this place, offered their prayers and wishes at the stupa, which made this place special and holy. I sincerely hope that the parties involved will show respect to the feelings of the believers and will find a way to keep the stupa where it was erected.” (Золотая обитель Будды Шакьямуни)

The situation, as of yet, remains unresolved.

Robbery of a billion of dollars’ worth: How the inheritance of Roerich, a man of genius and artist, was stolen

Anatoly Karpov: “A War is going on to destroy the Roerich Museum”

03.29.201704.27.2017
Dear participants of the conference, I welcome you here in Moscow, at Nicholas Roerich Museum. We are going through hard
Chronicle

Against the ngo Museum named after Nicholas Roerich force was applied

Marga Kutsarova. The situation of the Nicholas Roerich Museum in the light of the international standards

“The first impression with what I saw is the resemblance to the destruction of the Yasnaya Polyana by German Nazis.” What happened to the Center of the Roerichs // “Sobesednik”

Did Medinsky «rob» the Museum of the Roerichs? // The Morning News