On January 30, 2018, the press conference initiated by the International Centre of the Roerichs took place at the press centre of Rosbalt Information Agency. One of the crucial topics discussed during the meeting was the illegal seizure of the Museum by the Ministry of Culture of the Russian Federation and its subordinate – the State Museum of Oriental Art.

The Vice-President of the International Center of the Roerichs Alexander Stetsenko told that Svetoslav Roerich donated the heritage of his family to Russia for the creation of a non-governmental museum in the 90’s of the XX century. At that, Svetoslav Roerich set two mandatory conditions. First, the museum must be of a non-governmental format. Secondly, it was to be located in the Moscow Lopoukhins’ Estate.

The International Center of the Roerichs founded by Svetoslav Roerich received a dilapidated building of the ancient Lopoukhins’ Estate. The estate was restored thanks to patrons and the public without a single penny of government funds. The ICR was awarded a national award in the field of restoration and a prize of the European Union for the preservation of the cultural heritage of Europe.

The ICR with the help of patrons returned more than 400 paintings and drawings of Roerich to Russia, held over 600 exhibitions, published 250 books from the Roerichs’ heritage and about the Roerichs. The Non-Governmental Museum Named after Nicholas Roerich of the ICR became the largest non-governmental museum in Russia with the world’s largest art collection and archives of the Roerich family. 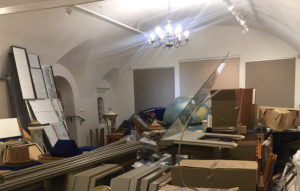 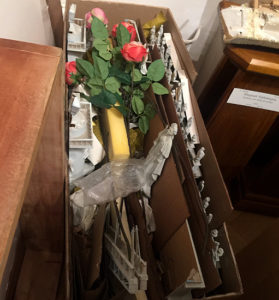 The unbearable condition of the Roerichs heritage under the possession of the new owners.
Damaged exhibits, being stored in the dark remote corner.

The situation changed radically when a new Minister of Culture Vladimir Medinsky took the office. He took a course to destroy the non-governmental museum. In 2015, the Ministry of Culture demanded the prosecutor’s office to remove the heritage belonging to the ICR. The prosecutor’s office conducted 5 inspections, but could not make a decision on the illegality of the heritage possession. Not having a single document on the Roerichs’ heritage, the Ministry of Culture did not appeal to the court. An entirely different path was chosen to end in the most real hostile takeover. Novye Izvestia previously covered this issue.

The Living Ethics hall before the seizure

Ilya Shablinsky, a member of the Council for the Development of Civil Society and Human Rights under the President of the Russian Federation, Doctor of Law, Professor, stressed that there has been no legal basis for such actions by the Ministry of Culture and other structures in relation to the ICR and its Non-Governmental Museum Named after Nicholas Roerich. 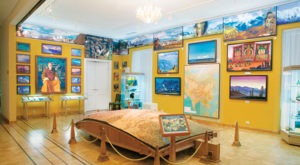 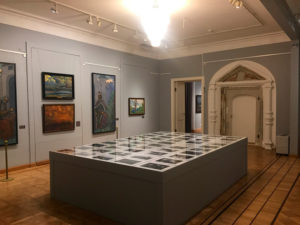 The Council for the Development of Civil Society and Human Rights under the President of the Russian Federation has never faced such situations when governmental structures deprived the property of a non-governmental organization.

The Council has appealed in this regard to the first deputy head of the Presidential Administration of the Russian Federation S. Kiriyenko but received no response. Ilya Shablinsky called for a legal and historical assessment of what is happening. Natalia Cherkashina, Acting Director General of the Non-Governmental Museum Named after Nicholas Roerich, emphasized that the Museum Named after Nicholas Roerich was the largest non-governmental museum in Russia and one of the largest in Europe.

Natalia Cherkashina noted that the 25th anniversary of the Non-Governmental Museum Named after Nicholas Roerich, which was planned to be celebrated on February 12, 2018, will be marked by the opening of a virtual museum. Minister Medinsky will not be able to erase the Roerichs from the memory of people. The situation of total lawlessness around the International Center of the Roerichs has already gone well beyond Russia and caused serious concern to the world community. The press conference received letters of support from Austria, Bulgaria, Latvia, the Republic of Belarus, as well as from the European Association of Support to the ICR and its Non-Governmental Museum Named after Nicholas Roerich.

04.16.2018
Resolution International congress of public “Destruction of the non-governmental Museum named after Nicholas Roerich in the light of problems in
Media

Did Medinsky «rob» the Museum of the Roerichs? // The Morning News

Statement of the International Centre of the Roerichs

VLADIMIR PUTIN: You have dedicated your life to selfless and enlightening activity